Many Paths, One Destination: Forging Your Way to Retirement

I want to save for my retirement; what type of plan should I use? A traditional IRA or a Roth IRA—or another vehicle?

Saving for retirement is a big subject and important for every person to think about, plan for, and execute. If this topic is not currently relevant to you, it likely is to one of your family members, whether a spouse, sibling, a child, or even a grandchild. While Social Security benefits can serve as an important part of income during retirement, for many retirees these funds are not sufficient to cover expenses during retirement years. Historically, many workers could count on pensions, programs in which companies would “save” on behalf of employees during working years and then “return” these funds to employees during retirement years. These “defined benefit” plans have largely been replaced by “defined contribution” plans such as 401(k)s and Individual Retirement Accounts (IRAs), which place most of the responsibility for retirement savings and planning with the employee.

“One of the key questions for many is whether to use a traditional IRA or a Roth IRA.”

This fundamental shift of responsibility from companies to employees makes it important for workers to have a basic understanding of the retirement vehicles that are available to them as individuals accumulate savings while working and plan to access those funds during retirement. The primary options are IRAs, Roth IRAs, 401(k)s, Roth 401(k)s, and 403(b)s. One of the key questions for many is whether to use a traditional IRA or a Roth IRA. As we explore this question in some detail, keep these two points in mind:

“...any funds contributed to one of these accounts grow tax-deferred or tax-free while in the account.”

Some of the principles of traditional IRAs and Roth IRAs are the same. In both cases, any funds contributed to one of these accounts grow tax-deferred or tax-free while in the account. This means that no taxes are paid on the capital gains, dividends, or interest that is earned inside the account. In the case of traditional IRAs, income taxes are deferred until withdrawals of funds begin, while withdrawals from Roth IRAs are not taxed because the funds were already taxed when they were put into the account.

A key differentiator between the two is the required minimum distributions (RMDs) that must be taken from a traditional IRA beginning at the age of 70 ½.  In the first year, about 3.6% of the account value (IRA value divided by 27.4, according to Internal Revenue Service tables) is distributed and recognized as taxable income. This contrasts with Roth IRAs, for which there are no required distributions. Under current law, distributions are 100% tax-free because taxes were paid on the original earnings.

Named after Delaware Senator William Roth (thank you Bill!), Roth IRAs were established with the Taxpayer Relief Act of 1997. A Roth IRA is a type of retirement plan in which after-tax dollars are contributed to an account. These funds grow tax-free until used, and upon use are not taxed at the federal or state level. Funds can be left in a Roth IRA for the owner’s entire life and be passed to the next generation. The maximum amount that can be contributed to a Roth IRA is the lesser of the owner’s earned income for the year or the limits noted in the table on the following page. There are also income limits for Roth IRAs. For those above the income restriction levels, a Roth 401(k) might be utilized if offered by one’s employer.

Traditional IRAs were established as part of the Employee Retirement Income Security Act of 1974 (ERISA). The before-tax contribution limits for traditional IRAs are identical to those of Roth IRAs, and, like a Roth IRA, the owner (or the owner’s spouse) must have earned income of at least the same amount as the contribution. A key point is that if neither member of the couple is covered by a retirement plan at work, the traditional IRA contribution is deductible. However, if either is covered by a work-sponsored plan, then modified adjusted gross income (MAGI) based limitations apply to the deduction. However, “after-tax” contributions can still be made.

The other retirement vehicle for which the Roth concept applies is a company sponsored 401(k) plan. A 401(k) plan is a defined contribution plan in which an employee can contribute either before-tax or after-tax dollars. Similar to IRAs, no taxes are paid on capital gains, dividends, or interest while the investments are in the plan. One of the large advantages of 401(k) plans in comparison to traditional IRAs is that the contribution limits are higher and there is no income limit for the deduction. Some company plans include a Roth 401(k) option. The choice of whether to use a 401(k) or Roth 401(k) is similar to the IRA choice; it depends on one’s current versus future tax rates and desire for flexibility (the Roth offers more flexibility in the future because distributions are not required). Basic elements of these retirement savings vehicles are summarized in the table below. 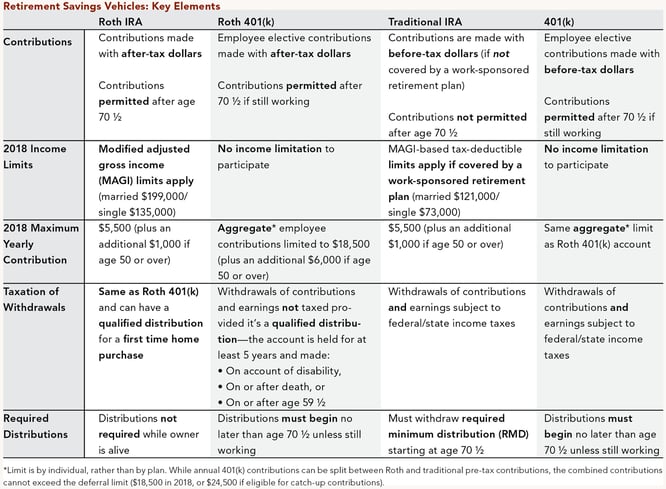 A traditional IRA may be worth more to a person who earns, for example, $120,000 per year than an individual with $30,000 in income per year because the higher earner receives a larger tax deduction. If the high earner takes the tax deduction savings and also invests those funds, then the longer-term value of the traditional IRA may exceed that of a Roth IRA. Again, this depends on the tax rates at contribution and withdrawal. If tax rates at withdrawal are lower, then the traditional IRA will prove more valuable.

For a traditional IRA, under the Tax Cuts and Jobs Act of 2017 (TCJA) the strategy of donating to charities directly from an IRA after age 70 ½ is now included in the law. The qualified charitable distribution (QCD) allows those who meet the minimum age of 70 ½ to give money to charities directly from IRAs in a tax advantageous manner. The advantages are that the QCD counts toward satisfying the RMD and the distribution is excluded from the taxpayer’s income. With fewer individuals expected to itemize deductions under the TCJA, the income tax deduction may be lost for many people. Besides the age requirement, one restriction is that the QCD is limited to $100,000 per year.

“The qualified charitable distribution (QCD) allows those who meet the minimum age of 70 ½ to give money to charities directly from IRAs in a tax advantageous manner.”

Another way to establish a Roth is to complete a conversion process from a traditional IRA to a Roth IRA. This may be more attractive today due to the lower tax rates that were a result of the TCJA. While prior to 2010 this was only allowed for those with a MAGI under $100,000, today anyone can utilize this option. A conversion involves withdrawing funds from the traditional IRA (or a portion of it) and contributing the funds to a Roth IRA. Taxes are due on the amount withdrawn for the conversion, but the funds then grow tax-free in the Roth. This process is a bit tricky, because the extra taxable amount from the traditional IRA may push a taxpayer into a higher tax bracket in the year of the conversion. Multi-year conversions are also an option that can reduce or spread out the tax implications of the change. We recommend seeking advice and assistance from one’s accountant and investment counselor before taking this step.

CIRCLING BACK TO WHERE WE STARTED

While the exact circumstances are limitless, the key variables in the decision process for investing in a traditional IRA or a Roth IRA are age, current and retirement-based income levels and tax rates, the retirement plan offered by the employer, cash flow circumstances, and spending habits now and during retirement.

Consider Roth IRAs as a tool that may fit into a long-range financial planning picture with the potential for being a very valuable (and flexible) asset. One of the main reasons we encourage considering a mixture of Roth and traditional accounts is that with so many variables—including the possibility of changes in tax laws—having a blend can provide more options in the future.

Download Article: Many Paths, One Destination: Forging Your Way to Retirement

Social Security as an Inflation Hedge

Erica S. White
Let's take the next step together