U.S. monetary policy is more active than ever, with the Federal Reserve exerting considerable influence on the global financial and economic environment. We believe that the current landscape may warrant asset allocation shifts in investment portfolios.

Background – The Rising Influence of the Federal Reserve:

The Federal Reserve was established by Congress in 1913 as a decentralized organization of twelve Federal Reserve banks spread across the county. Congress created a central bank to provide the nation a safer, more flexible, and more stable monetary and financial system. The Fed was relatively obscure until the 1970s when it dramatically increased the economy’s money supply (this primarily consists of U.S. bank deposits and money market funds) in the early part of that decade to quickly boost the economy. This partially fueled very high inflation in the later part of the 1970s and into the early 1980s.

President Carter made the first meaningful attempt to control inflation by nominating Paul Volcker as Fed Chair in 1979. To combat rampant inflation, Volcker took decisive action, increasing interest rates well into the double-digits by the early 1980s. This induced a substantial recession in 1982/1983. This painful process gradually reduced inflation, culminating in inflation rates between 1% and 2% in the most recent decade. This downshift in inflation was concurrent with interest rates declining from double-digit levels in the 1980s to under 1% in 2020.

The Great Financial Crisis and the Covid-19 Pandemic:

The financial and economic environment has been shifting in many ways since the Great Financial Crisis in 2008/2009, but especially so over the last two years in response to the Covid-19 pandemic lockdowns.

"The financial and economic environment has been shifting in many ways since the Great Financial Crisis in 2008/2009, but especially so over the last two years in response to the Covid-19 pandemic lockdowns."

The presence of the Fed in financial markets grew immensely from 2008 on. The Fed’s balance sheet, which underpins the money supply, was below $1 trillion in 2007, then ballooned to nearly $4.5 trillion in 2019 as the Fed bought massive amounts of U.S. government bonds (quantitative easing). In early 2020, the balance sheet ballooned again during the Covid-19 pandemic; by January 2022, the Fed balance sheet reached nearly $9 trillion. Concurrent with the growth of the Fed’s balance sheet was the dramatic increase in the money supply. From $15.4 trillion in March 2020, M2 (one measure of money supply) grew to nearly $22 trillion – an increase of over 40% in less than two years, compared to approximately 5% annual growth in the money supply in the previous 40 years. To put the scale of these values in perspective, U.S. real GDP (the country’s economic output) stands at about $20 trillion as of year-end 2021. 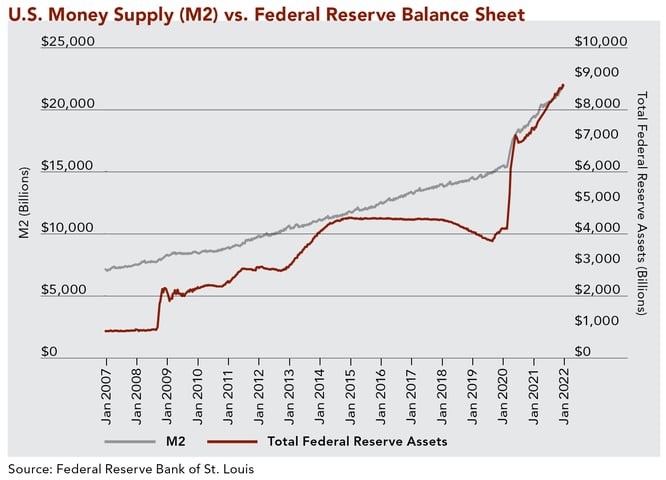 The dramatic increase in the money supply has helped create price inflation. From 2019 through 2021, inflation, as measured by the personal consumption expenditure (PCE) price index, increased by about 3.3% and reached 6% in the last quarter of 2021. Specifically, the substantial amount of liquid funds helped fuel purchases of financial assets, real estate, and other investment options, inflating asset values as well as pushing inflation of goods and services up to the high single digit levels. By comparison, from 1929 through 2019, overall U.S. inflation was a moderate annual rate of 2.7%, including a modest 1.6% from 2008 through 2019.

"The dramatic increase in the money supply has helped create price inflation."

The Covid-19 pandemic response by the Fed and the U.S. government was unprecedented in its pace and scope. The Fed reduced short-term rates to nearly 0%, coupled with the massive buying of U.S. Treasury and U.S. agency securities, as well as corporate bonds via controversial special purpose vehicles. At the same time, the Trump and Biden administrations flooded the U.S. economy with massive amounts of funds and stimulus, attempting to minimize the economic fallout from the pandemic shutdown. As a result of federal deficit government spending, the U.S. debt level expanded by roughly $7 trillion since the end of 2019 to its current $30 trillion level.

With U.S. debt at $30 trillion and a Fed balance sheet near $9 trillion, it is difficult to estimate with confidence what might happen next. Nonetheless, we expect economic growth in the U.S. to slow from the high pandemic recovery rates of roughly 6% in 2021 to 2-3% in 2022. We believe much of the GDP increase in 2021 included inventory build ups as well as a post-pandemic consumer spending surge. Both trends are likely temporary; consumer spending should moderate, and companies will likely slow down production and purchases to maintain more manageable inventory levels.

Ultimately, the Fed is threading a very narrow needle to maintain full employment (and a healthy economy), a steady inflation rate, and financial market stability. Lowering inflation without destabilizing markets is extremely difficult. Alan Blinder, a former Vice Chair of the Fed, recently shared his viewpoint1 on the challenge: “By late 2022, economic growth could be sluggish, the unemployment rate could be stable or inching up, and the inflation rate could be nearly back to 2%. If that’s what the future holds, the Fed will want to be cautious about how fast and how far it hikes interest rates during the first half of 2022.” We agree with Dr. Blinder’s evaluation. The Fed is juggling priorities, potentially limiting their effectiveness. Therefore, our expectation is that interest rates will increase much more modestly than markets are anticipating.

"Ultimately, the Fed is threading a very narrow needle..."

We are paying careful attention to the strength of the economy as economic tailwinds may dissipate by 2023, especially with respect to consumer spending. In addition, higher interest rates may cause financial leverage issues to surface as the cost of borrowing becomes more expensive, as well as crimp the robust real estate market by significantly increasing mortgage rates.

What will happen to inflation? The answer largely depends on how transitory contributors to inflation prove to be. That is, how much of a role did supply chain disruptions play? How much did loans and stimulus checks boost demand? While the answers matter, we believe the flywheel of inflation has been started by the huge increase in the money supply. As a result, we would not be surprised to experience 3-4% inflation over the next several years – roughly double pre-pandemic levels. While our outlook is somewhat moderate, significant differences of opinion amongst economists and analysts on inflation trends over the next few years underscores the uncertainty that lies ahead.

Given the prominence of the Fed and the U.S. government, we believe that the 2020s will be a less predictable period, where maintaining real (post-inflation) purchasing power and wealth will be an important goal for many clients. Following the huge double-digit run of stocks in the 2010s and into the early 2020s, it now appears that investors are looking toward more fundamentally strong and reasonably priced stocks – the type of solid, high-quality stocks in which Clifford Swan invests. We believe ownership in strong companies should provide good total returns.

"...we believe that the 2020s will be a less predictable period, where maintaining real (post-inflation) purchasing power and wealth will be an important goal for many clients."

In addition, we are considering a broad range of diversified assets that are not strongly correlated to each other over a longer horizon. Depending on risk tolerances and appropriateness for each individual client, international stocks, real estate, precious metals, as well as other potential alternative options – including cash itself – might be compelling.

"...we are considering a broad range of diversified assets that are not strongly correlated to each other over a longer horizon."

The presence of the U.S. government and the Federal Reserve has become massive, with both reshaping the investment environment. Our challenge is to gauge the direction and crosscurrents that their recent actions will create, and to translate our perception into appropriate portfolio management decisions.