Early in the new year, after experiencing strong gains in their U.S. stock portfolios in 2019, investors saw geopolitical risk pulled into the spotlight as the U.S. strikes against the Iranian regime threatened an already delicate status quo in the Middle East. At the time, one might have suspected that 2020 would be a year wherein risks to the economy—and to the bull market in stocks—from political conflict or exogenous events unrelated to the Fed, trade wars, or other market drivers would dominate the news flow. One would not have been alone in this view. The Global Risks Report 2020, published by the World Economic Forum in January, surveyed 800 leaders from business, government, and non-profits. The report defined the most serious risks as those having an above-average rating on both likelihood of occurrence and impact on the global economy. The conclusion: interstate conflict, global governance failure, cyber-attacks, and extreme environmental events are the top risks in 2020.

To complicate the geopolitical landscape further, the U.S. entered an election year with polls pointing to another close race. With policy rhetoric from both parties growing farther apart, investors are facing yet another political event that is both difficult to predict and characterized by two very different outcomes.

“The good news is that the types of risks discussed so far have had little impact on long-term investment returns.”

The good news is that the types of risks discussed so far have had little impact on long-term investment returns. LPL Financial Research looked at stock market drawdowns (as measured by the S&P 500 Index) after various major geopolitical events since World War II, analyzing the magnitude and length of the drop as well as the number of days until recovery. The data shows that Pearl Harbor, Iraq’s Invasion of Kuwait, and the 9/11 attacks did correlate with double-digit market corrections. But in these extreme cases, the market recovered from its decline well inside one year. On average, across twenty significant events, stocks suffered a 5% drawdown over 22 days and recouped their losses in just 47 days. For long-term investors, that’s a blip.

A similar analysis of stock market performance before and after close presidential elections shows that the removal of uncertainty over who would win has mattered more than who actually won. Beginning with Eisenhower/Stevenson in 1952, Deutsche Bank looked at the seven elections in which the candidates were polling within 3 percentage points of each other during the election year. 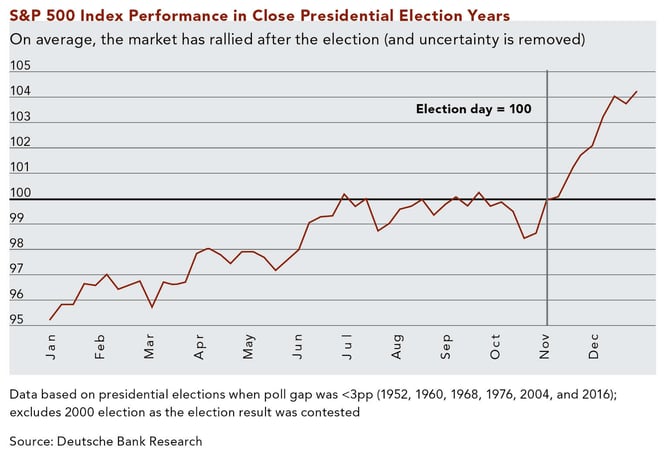 On average, the market rose until the summer, flat-lined from July through the election, and rallied immediately afterwards through the end of the year once a winner was declared.

Although it is impossible to predict the future based on the past, the data on market performance around geopolitical events and presidential elections puts context around the media’s favorite topics and allows us to focus on what matters most to the market: earnings. The outlook remains positive. An analysis of S&P 500 constituents’ quarterly earnings growth by Goldman Sachs frames the situation well (see the chart below). 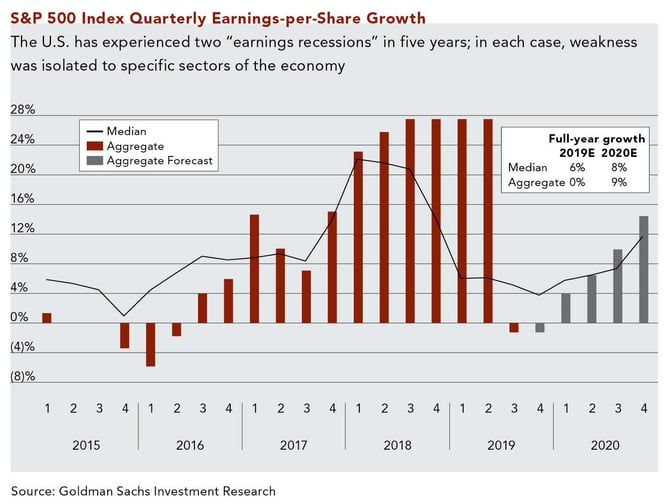 The U.S. has had two “earnings recessions”—two or more consecutive quarters of earnings declines—over the past five years. The first was in late 2015 into early 2016. The second was more recent, during the last two quarters of 2019. At the time, each period had multiple forecasters predicting a deeper economic downturn. In 2016, that never materialized, and 2020 looks likely to repeat the pattern.

The 2015-2016 earnings recession was primarily driven by the energy sector. Oil had fallen from over $100/barrel in mid-2014 to less than $30 in early-2016. Energy producers, servicers, suppliers, and partners were hurting, and there was speculation that their pain would spread to other sectors of the economy. That never happened. Although energy companies caused S&P 500 earnings growth to turn negative in the aggregate, the median company’s earnings continued to grow, which is to say most companies continued to do just fine.

In late 2019, trade tensions between the U.S. and China exacerbated a slowdown in manufacturing activity, as it is difficult for producers of goods to take the risk of ramping up output when the tariff picture is unclear. But in early 2020, trade uncertainty subsided, as evidenced by rosier manufacturing surveys in the U.S. and China. It appears that earnings growth will resume in 2020, with declines in 2019 having been isolated to certain industrial sectors.

“Though the overall earnings environment looks healthy in early 2020, the other key driver of market returns —multiples on those earnings—appear stretched, though not overly so.”

Though the overall earnings environment looks healthy in early 2020, the other key driver of market returns—multiples on those earnings—appear stretched, though not overly so. Since 1935, the S&P 500 has traded below its current 19x price/earnings multiple about 80% of the time per Deutsche Bank research. Granted, that makes 19x seem expensive. However, the most common level of 15-19x, which has occurred on 40% of all trading days, is not far below where we currently are. A correction to 16x, for example, would only represent a 16% downward move.

Market sentiment, like multiples, also strikes us as being optimistic, particularly toward growth companies. As we have written in previous updates over the past several years, low interest rates continue to push investors into paying higher valuations for companies that can grow, and, ideally, generate the returns investors are seeking even if those returns are years into the future. The situation can be boiled down to supply and demand. The narrative goes like this: decades ago, when the economy was growing mid- to high-single-digits, investors could expect that level of growth as a baseline in the typical stock they owned. But today, with GDP in the low-single-digits in developed economies, the supply of growing companies has declined. A low supply of such companies combined with unsatisfactory returns in fixed income and less risky asset classes is the perfect recipe for demand to exceed supply, leading to higher prices being paid for companies that can grow.

Nevertheless, in contrast with the last time we can remember the market being so infatuated with growth stories—the dot-com era—there are signs that investors still require a path to profitability before committing capital. The failed initial public offering of WeWork is a good example. Intense scrutiny of a new offering’s business model is healthy in a properly  functioning stock market. If we do reach another period when any company with plausible growth prospects can attract capital, we will know that sentiment has become frothy.

It seems that the Great Recession left such a mark on the investing public that no matter how long the bull market lasts, many are still wary of putting money in the market. The Financial Times recently noted that in the 11 years from 2008-2019, five of those years saw net outflows from stock-focused mutual funds and ETFs, with 2019 experiencing the largest outflow of any year. Contrast that with the 16-year period from 1992-2007, during which flows were positive every year. Until the market fully embraces risk and stocks become loved, the case for the decade-plus rally will survive. 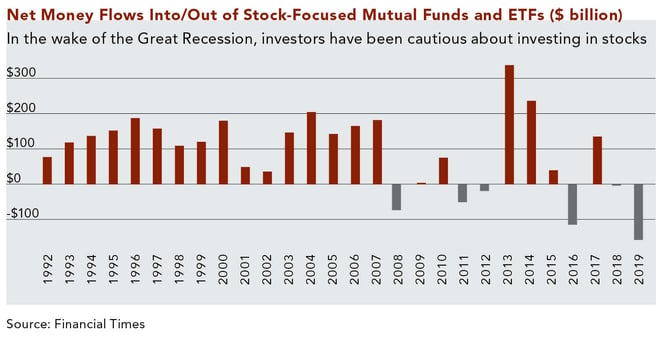 Lu, Marcus. “Visualizing the Biggest Risks to the Global Economy in 2020.” https://www.visualcapitalist.com/biggest-risks-globaleconomy-2020-environment/. 17 January 2020.