"Planned giving" is a broad term for charitable gifts made in conjunction with an individual’s financial or estate plan. These gifts are usually infrequent and relatively large. They can be outright gifts that are made available to the charity immediately, or they can be deferred to be used by the charity at a future date. Deferred gifts are a current decision to make a gift in the future and can be irrevocable, in the form of a gift annuity or charitable trust, or revocable, as in a will bequest or beneficiary designation in a life insurance or retirement plan.

As a donor’s uncertainty about his or her future financial needs and resources increases, the most appropriate form of gift generally moves from an outright gift to an irrevocable deferred gift, and finally to a revocable deferred gift. In all but an outright gift, the donor retains some right. The retained interest may be the right to periodic payments from a gift annuity or charitable remainder trust, or what remains when a charitable lead trust terminates. In a revocable gift, the donor retains the right to remove the charitable disposition in his or her will or change the charitable beneficiary in an insurance or retirement plan.

This article will focus on the intermediate stage of the planned giving continuum, irrevocable deferred giving. This includes various types of planned giving arrangements, each with unique characteristics that have evolved to address specific donor needs. A future article will address how the charitable deduction is calculated for each of these planned gifts and how the beneficiary (oftentimes, the donor) reports the payments he or she receives on a personal tax return. 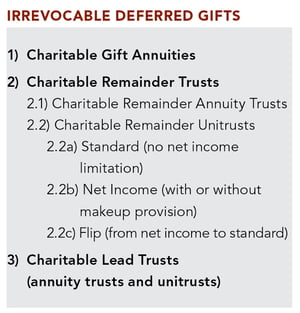 Like annuity trusts, the periodic payments to the beneficiary are fixed and do not change over the life of the payments. Unlike annuity trusts, gift annuity payments are not subject to the availability of trust assets since the payments are a general obligation of the charity. For these reasons, gift annuities appeal to donors who are looking for certainty in the periodic payments they receive from the charity that assumes all the risk inherent in these life-term payment obligations.

Unlike annuity trusts and unitrusts, charitable gift annuities do not require a trust agreement or trustee. Reporting to the beneficiary on the taxability of the payments he or she receives does not involve annual calculations incorporating the types and timing of the income earned by the underlying investments. In addition, there are no annual tax returns that must be filed. Overall, the cost of creating and administering a charitable gift annuity is significantly less than other types of planned gifts, making charitable gift annuities most appropriate for smaller and more frequent giving.

A charitable remainder trust is a separate legal entity created by the transfer of assets to a trust governed by the terms of a trust agreement that is administered by a trustee. Annual trust tax returns are required that produce a K–1 for the beneficiary income reporting based on the type and timing of the trust income. Due to the administrative burden of a charitable remainder trust, these types of arrangements typically involve larger, less frequent gifts than a charitable gift annuity.

Additional contributions may be made to a unitrust but not an annuity trust. A unitrust is therefore the only trust arrangement for donors who intend to make additional gifts of the same type and want to avoid creating additional trusts.

There are three basic types of unitrusts, each designed to accommodate unique donor situations; standard, net income, and flip unitrusts.

A standard unitrust makes periodic payments to an income beneficiary based on a percentage (payout rate) of the trust’s value. The unitrust must be revalued, and the income beneficiary distributions recalculated, at least annually. The amount paid from a standard unitrust does not depend on the amount, or type, of income earned by the trust investments. These trusts are used where cash or readily marketable securities are transferred into the trust by the donor.

Net income unitrusts present additional issues and opportunities. Since distributions are limited to distributable income and the trust can define distributable income, the donor is given more tools to deal with their unique circumstances. Funding a unitrust with unmarketable securities would present a liquidity problem in making the beneficiary distributions. Also, the donor may not want the trust to make beneficiary distributions until some later date as in a retirement plan equivalent.

Distributable income could include only interest, dividends, rents, and royalties received by unitrust investments. This would solve the liquidity problem of unmarketable assets since the beneficiary distributions would be limited to the liquid assets received as interest, dividends, rents, and royalties. Equities and their low dividends could satisfy the retirement plan motive in the early years of the unitrust followed by a movement into bonds thereby increasing the distributable income paid to the beneficiary in the later years of the unitrust when the beneficiary’s other sources of income may be diminishing.

A flip unitrust is an arrangement that begins as a net income unitrust then converts (flips) to a standard unitrust at a pre-determined time or upon the occurrence of an event, such as the sale of unmarketable securities.

"It takes careful consideration to determine which methods will be of the greatest benefit to both you and the charity whose mission you want to support."

The vehicles for irrevocable deferred gifts are varied and nuanced. It takes careful consideration to determine which methods will be of the greatest benefit to both you and the charity whose mission you want to support. If you are interested in giving—or reevaluating your gifting strategy—your investment counselor would welcome a conversation to consider your options.

Kenneth H. Dike
Let's take the next step together