How to Invest in a Changing Fixed Income Environment

In last quarter’s newsletter, equity analyst Dan Mintz considered equity investment in an inflationary environment. Today, we will discuss how the fixed income landscape is changing and share our resultant investment strategy.

With prices for everyday purchases like food and gas remaining high, inflation continues to be top-of-mind for both consumers and investors. However, following the Consumer Price Index (CPI) peaking in June 2022 when it rose 9.1% compared to the previous year, we are starting to see signs of a slowdown in inflation. Noticeably at the gas pump, average gasoline prices are steadily going down after half a year of gains that culminated in record-high prices in mid-June. Other commodities such as wheat and copper are also on a downward price trend. Declining commodity prices may indicate that inflation is finally reducing consumer and industrial demand for goods.

"The Fed faces a delicate balancing act to achieve a “soft landing” wherein they slow inflation (and economic activity) without tipping the nation into a recession."

Weaker demand for commodities could also be a sign of slowing economic growth. Indeed, investors have become increasingly concerned with the risk of recession. The U.S. Federal Reserve is raising interest rates to combat price inflation, intentionally slowing consumer spending and business investment to achieve this goal. The Fed faces a delicate balancing act to achieve a “soft landing” wherein they slow inflation (and economic activity) without tipping the nation into a recession.

"With consumer spending recently picking up and historically low unemployment, among other factors, [the National Bureau of Economic Research] do not yet see evidence of a recession."

The U.S. economy has shrunk the past two quarters, with gross domestic product (GDP) declining -1.6% in the first quarter of the year and -0.9% in the second. Many economists define a recession as two consecutive decreases in economic output. We saw another sign of a downturn when the S&P 500 Index recently entered a bear market (traditionally defined by a 20% fall from the high). While these technical indicators are concerning, formally the National Bureau of Economic Research (NBER) is responsible for identifying a recession. The criteria they use is a “significant decline in economic activity that is spread across the economy and that lasts more than a few months.” With consumer spending recently picking up and historically low unemployment, among other factors, they do not yet see evidence of a recession.

"Although yield curve inversion is a potential recession signal, it does not always translate into a recession."

The U.S. Treasury Curve, a graph of the relationship between Treasury yields and time to maturity, also has a track record for foreshadowing recessions when it inverts. An inversion occurs when shorter maturity yields move above longer maturity yields. Although yield curve inversion is a potential recession signal, it does not always translate into a recession. For example, in 2019 the yield curve inverted due to concerns that the Federal Reserve’s increase in interest rates would weigh on consumer spending and business activity. While the U.S. did experience a slight recession in 2020, that economic slowdown was due to a global pandemic rather than regular economic activity. The following chart demonstrates the historic relationship between yield curve inversion and recession. Inversions occur when a spread drops below zero, entering high recession risk territory. The shaded areas indicate recessions that followed inversions. Today, one indicator, 10-year/2-year spreads (represented by the grey line) has already reached the high recession risk zone threshold. As the red line shows, we have not yet seen the 3-month yield rise above the 10-year yield (some academics view this particular inversion as the most reliable recession predictor). 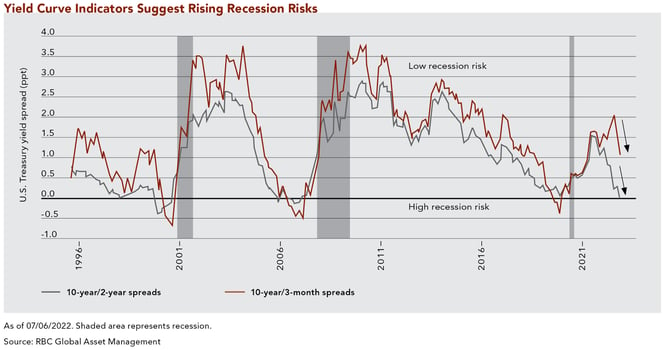 While the economy has contracted, we do not anticipate a pervasive downturn. That being said, going into 2023, we are mindful of the economic uncertainty ahead of us. Our fixed income investment strategy is based on today’s macroeconomic and market environments, as well as our outlook. As always, we will adjust our strategy as appropriate.

Many factors drove the fixed income sell-off in the first half of 2022, including supply chain issues, a change in monetary policy, war in Ukraine, and inflation fears. Rapid changes in market sentiment drove the largest outflow cycle ever recorded for the municipal bond market. As of the end of June 2022, municipal bond funds experienced an outflow of $86.6 billion year-to-date, which surpasses the prior largest outflow cycle during the mid-2010s. This has pushed municipal yields to near multiyear highs, especially in very short maturities like 2-year bonds.

With strong tax collection and federal government aid, the need to issue state and local government bonds could be reduced.

Despite this year’s selloff, we are seeing improving credit fundamentals across state and local governments after receiving sizable federal aid as part of the American Rescue Plan Act of 2021. Moreover, home prices appreciated significantly during the pandemic, and in turn have provided increased property tax revenues, which will be a tailwind for local government credit in the years ahead. For example, California has a record budget surplus and Illinois’ credit rating was upgraded for the first time in 25 years. With strong tax collection and federal government aid, the need to issue state and local government bonds could be reduced. Specifically, California has already announced that the state will fund projects with their excess cash, rather than issuing new debt. As a result, we expect a lower supply of municipal bonds. Additionally, existing issuances may be poised to rally over the second half of the year.

n the first half of the year, it was attractive to position portfolios with shorter maturing fixed income securities as we saw buying opportunities in the higher interest rate environment. Now we will consider longer maturities as we are seeing interest rates peaking and inflation showing signs of abating. Municipal bonds continue to offer investors a good source of tax-free income.

"Now we will consider longer maturities as we are seeing interest rates peaking and inflation showing signs of abating."

The taxable fixed income market also faced some selling pressure in early 2022 as interest rates rose across the yield curve. In addition to the Federal Reserve’s interest rate hikes this year, the reduction in the Fed’s holdings of government securities also contributed to higher yields in the taxable market. Currently, the Fed has a capped runoff of $47.5 billion ($30 billion for Treasuries and $17.5 billion for mortgage-backed securities) per month until September, when the cap will increase to $95 billion. The Fed’s path towards tightening will provide opportunities in the taxable market that include Treasuries, agency debt, corporate bonds, and securities backed by residential mortgages (mortgage-backed securities, called MBS).

"In addition to the Federal Reserve’s interest rate hikes this year, the reduction in the Fed’s holdings of government securities also contributed to higher yields in the taxable market."

Since the beginning of the year, we saw Treasury yields increase significantly across the yield curve. For example, in July the yield for the 2-year Treasury increased from 0.20% the previous year to 2.89%. Corporate spreads, the difference between yields on a U.S. Treasury note and corporate bonds, has also widened. The runoff of mortgage-backed securities on the Fed’s balance sheet was expected, but what has also caught our attention is the weakening demand from institutions for these MBS investments. Depository institutions commonly purchase government backed securities for diversification and have been a large purchaser in the MBS market during the pandemic. However, the lack of deposit growth has subdued their purchasing power.

For the first half of the year, we strategically stayed with short maturities in anticipation of a higher interest rate environment and widening credit spreads. We also increased our Treasury purchases as yields became increasingly attractive. Now in the second half of the year, we plan to continue to take advantage of widening spreads in the corporate market and focus on relatively more stable and predictable businesses, such as food and utilities companies, which tend to be more defensive in a recessionary environment. In our view, economic fundamentals will likely dictate where the credit market trades in the second half of the year.

"...we plan to continue to take advantage of widening spreads in the corporate market and focus on relatively more stable and predictable businesses, such as food and utilities companies..."

For investors, a changing landscape presents both challenges and opportunities. In today’s environment of high inflation, increasing interest rates, and slowing economic growth, we believe our longstanding discipline in selecting high quality securities—whether stocks or bonds—and carefully evaluating risk will serve our clients well. As always, part of our risk assessment is to understand the economy and markets and position portfolios appropriately.

Download Article: How to Invest in a Changing Fixed Income Environment