As investors entering 2018, we are experiencing a nine-year-old bull market in domestic equities, with many of the major technology companies leading the way. In addition, many other asset classes have increased in valuations (for example, in the art market, a Leonardo da Vinci painting recently sold for $450 million). Easy central bank policies have been reversed by the U.S., Canadian, and British central banks; the European central bank may not be far behind. Global economic growth in 2018 is projected to be at its highest levels in over five years. Geopolitically, there are a number of hot spots: North Korea; the Middle East; Russia; and terrorism, to name just a few. We see a lot of similarities between today’s confluence of risks and those of the 1970s. In any event, we believe there is a heightened risk environment which requires special attention.

With this backdrop, we are actively monitoring two key factors. First, as of December 20, 2017, domestic stock markets continued the strong advance of the past nine years (since March 2009), and we are concerned that the equity markets may experience significantly higher price volatility compared to the lower volatility of recent years. Second, the Federal Reserve continues to increase short-term interest rates and decrease its over $4 trillion investment portfolio. This reversal of the easy monetary policies of the past decade is significant because the availability of easy money may have underpinned the strong advance in the financial markets. There are a lot of moving pieces—including the Fed, central banks’ policies, and uncertainty on what to anticipate in the markets—to consider.

"This reversal of the easy monetary policies of the past decade is significant because the availability of easy money may have underpinned the strong advance in the financial markets."

The last few years have been highly unusual with respect to U.S. and international monetary policies (see the Clifford Swan article published in September 2016, Negative Interest Rates: The Imaginary Has Become Reality). We have seen extremely low, and even negative, interest rates globally. The Federal Reserve has been the first to reverse these easy money policies, given a solid, albeit subdued, 2%+ GDP growth rate. Since the situation is without recent precedent, most of us do not know what to expect as rates continue to increase, especially given the inexperience of the reconstituted Federal Open Market Committee (FOMC) board.

President Trump has nominated Jerome Powell, a current FOMC member and the first non-economist in nearly 40 years (since G. William Miller), to be Chair of the FOMC board, replacing Janet Yellen in February 2018. As a result, Dr. Yellen will step down from the board, joining Vice Chair Stanley Fischer (stepping down mid-year 2018) as departures from the board. In addition, the President has and will be nominating several additional members for the FOMC board, putting his strong mark on the helm of the U.S. central bank. One economist noted that there has been substantial turnover and a reduction in the FOMC economic staff, as well as shorter tenures by FOMC board members1. So, as monetary policy continues to be reversed by the Fed, a relatively novice board and staff are steering the boat.

"We believe that the Fed’s policy of gradually increasing rates will continue."

We believe that the Fed’s policy of gradually increasing rates will continue. The FOMC has posed a terminal level for short rates at just under 3% several years out. The most recent December increase brings short rates up to nearly 1.5%, suggesting at least five more interest rate increases over the next two to three years. We anticipate that rates may top out around 2.25% to 2.50%, with a relatively flat yield curve. A flat yield curve occurs when short-term interest rates are the same as long-term rates; for example, the 2-year U.S. Treasury yield at 2.5% and the 10-year U.S. Treasury rate at 2.5%. Flat yield curves, and especially inverted curves (short-term interest rates higher than longer-term interest rates), may suggest an economic downturn is looming. However, given the less experienced FOMC and its staff, it is plausible that policy could well overshoot that 2.75% to 3.00% goal as there may be misreads on economic data and trends, including inflation trends, especially if GDP growth comes in at a much stronger 2.5% to 3.0% (vs. 2%+ over the last nine years). In this situation, the yield curve may indeed become inverted.

Clifford Swan noted in a first quarter 2017 article (Inflation: Is This the Inflection Point?) that a modest increase in inflation may occur over the next couple of years. Combined with an increase of GDP growth to over 2.5%, the FOMC may be led to push rates higher. And given this unusual context, that action raises questions on how markets will react. If the yield curve flattens or even inverts so that short-term rates are higher than longer rates, will this flattening of rates actually predict an economic downturn? Historically, an inverted curve has been a very strong indicator of a potential economic downturn. While not all inverted yield curves lead to a recession, recent recessions have been preceded by an inversion (see the graph below; points where the curve falls below the thick black line indicate an inversion and precede a recession). According to the chart, we are gradually moving towards a flat curve as the difference between short-term (2-year) and long-term (10-year) Treasury rates moves towards zero (the thick black line). Therefore, the question may arise sooner rather than later. Given the unusual monetary conditions, we are not sure what to expect— it is unclear whether historic indicators will apply. Figuratively speaking, sailing out of a fog can be just as uncertain as sailing into it. 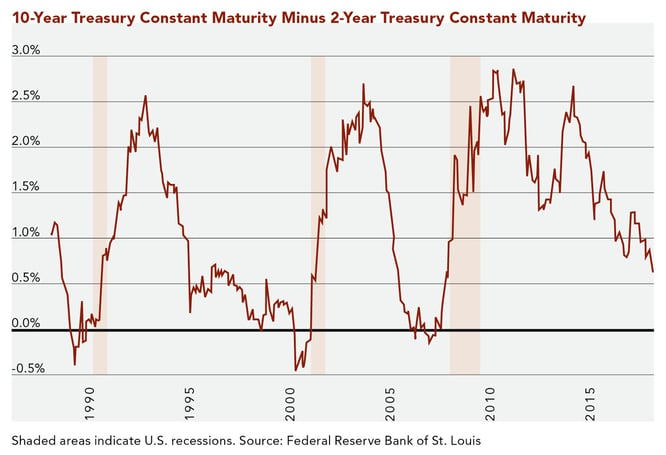 Given the unpredictable situation in the financial and monetary markets, both domestically and globally (remember, global markets have also been subjected to unprecedented monetary policy), Clifford Swan is not sure an inverted yield curve will indicate anything at these low interest rate levels. In general, many economists and analysts appear to be only modestly concerned about the flattening of the yield curve. One economic analyst noted that every recession since 1980 has been preceded by an inverted yield curve. He did not foresee such a yield curve in the near future and cautions that the Fed needs “to be careful,” lest it enter the danger zone of an inverted yield curve2. Another economic analyst notes that even if there is a yield curve inversion, a recession—if one occurs—is typically one year off3.

Finally, is the so-called Yellen (and earlier, Bernanke) put likely adding more interest rate distortions to the financial markets? This colloquial term signifies the expectation that the Fed will always protect against a major financial sell-off (as seen in the 2008/2009 Great Recession). Christopher Whalen, a financial analyst and a previous member of the Federal Reserve Bank of New York staff, noted emphatically that the Fed would always be there to backstop the markets; that is, the Fed will always provide liquidity and support to financial markets to hold off a massive correction and panic, in an effort to protect the integrity of the financial system. Mr. Whalen went so far as to say that this was the primary (yet unstated) policy mandate of the Fed. The two overtly stated Fed objectives are full employment and stable, non-inflationary monetary policy. Whalen notes that this is especially true in the context of managing an ever increasing debt load and interest payments by the U.S. Treasury4. We would argue that if the Fed, indeed, is providing a continuing backstop, unintended consequences will eventually emerge. What those might be are, of course, uncertain.

"We would argue that if the Fed, indeed, is providing a continuing backstop, unintended consequences will eventually emerge."

Nonetheless, Clifford Swan has sailed through many different environments over the last 102 years. We have generally taken a defensive, wealth preservation approach; going into the next few years, we anticipate that conservative orientation will serve us and our clients well in what we think will be much more volatile markets.

2. Harrison, Edward. Why the Flattening Yield Curve Doesn’t Worry Me Yet. www.pro.creditwritedowns.com. 7 November 2017.

How to Invest in a Changing Fixed Income Environment