As measured by the S&P 500 Index, the stock market has risen 10.6% since the U.S. Presidential election on November 8, 2016, including a 5.8% increase year-to-date through February 21, 2017. While there was considerable media attention when the Dow Jones Industrial Average broke through the 20,000 mark on January 25th, keep in mind that this number has no inherent value besides being a talking point for television pundits. Whether it’s the S&P 500 (the 500 largest stocks by capitalization in the U.S. stock market) or the Dow (the 30 most well-known of those 500 stocks), the bottom line is that stocks have been performing well since the election. 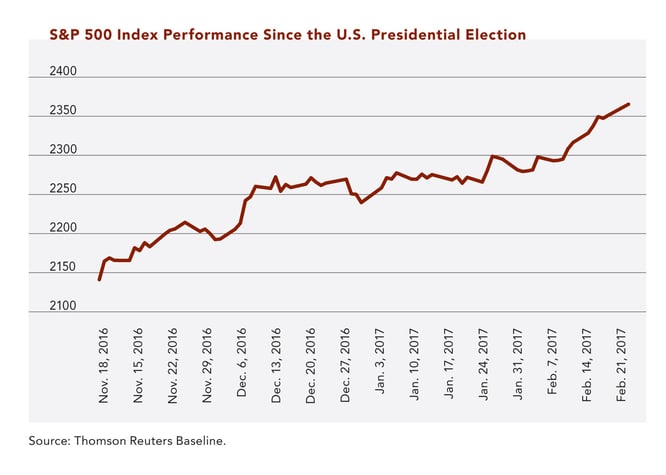 The stock market has performed well over the long-term as well. In the 18 years since 1999, when the Dow hit 10,000 and was trading at a 25 Price-to-Earnings (P/E) ratio, the stock market index has doubled. The Dow’s peak level in 1999 was a result of one of the strongest bull markets ever, when the stock market doubled twice (i.e. quadrupled) in the 10-year period from 1989 to 1999. This latest “doubling” in the stock market index is more impressive because, although it took 18 years, the market absorbed two major downturns during this time period. We first had the dotcom crash in 2001, followed by a financial crisis in 2008 that was largely attributable to the collapse of a bubble in the real estate market. On top of the market appreciation, investors also enjoyed strong income returns via the dividends that were paid out by corporations, with solid annual dividend yields of 2–3%.

The important question is, “Where do we go from here?” The answer to that question is, as always, “it depends.” The direction of the market is the result of multi-factored interactions. On the corporate earnings side, about 80% of companies have reported their latest quarterly results; more than 50% of those in the S&P 500 that have reported have beaten revenue estimates, and approximately 75% have beaten EPS (earnings per share) estimates. This is good news, and as we proceed through 2017, the key to solid stock returns will be the trend in revenue, earnings and cash flow growth expectations for our companies. As policies start to take shape in Washington, we should begin to get visibility on the impact those policies will have as companies report quarterly results through the year and talk about expectations going forward. If business fundamentals continue to show solid signs of growth and meet or beat current expectations, it will be a positive for investment returns. However, if growth slows and companies reduce their expectations for later in 2017 and into 2018, we may see a difficult stock market environment. With expectations of solid employment and some wage growth, relatively low interest rates, normal rates of inflation, and no major geopolitical events, we anticipate a solid market environment. Valuations, as measured by P/E ratios, are not cheap in general, but are approximately 20% lower than the “bubble” area of the late 90’s described above. Revenue, cash flow, and EPS growth will be most important to stock performance going forward. On average, we anticipate about 4–5% revenue growth and 12–13% EPS growth over the next year across our universe of companies. These growth numbers may be slightly higher than historical averages, but for all intents and purposes can be considered fairly normal.

In our fourth quarter 2016 market outlook, Peter Boyle talked about four policy areas that could potentially impact our economy positively: tax reductions, infrastructure spending, deregulation, and defense spending. With only a few months having passed since the inauguration, it is simply too early to know what the outcomes will be in those four areas. The important questions for the stock market are what specific policies and actions will be taken by the new administration, what impact those policies will have on the economy, and, more specifically, how corporate earnings will be affected?

On the regulatory front, a move to less stringent restrictions should benefit both revenue growth and profitability for some companies over time; especially those in the finance, energy, and industrial sectors. Revenue growth could come from more opportunities as some restrictions are lifted, and profitability growth could come from fewer work hours spent internally by companies on regulation requirements. It will be difficult to point to which specific regulation will benefit which specific company, where, and over what time period.

Lower taxes could also benefit revenues and profitability for the companies in our clients’ portfolios. As individuals’ tax rates go down, there tend to be incremental increases in discretionary spending, which benefits many businesses. Corporations benefit from lower taxes, which increase their profitability and could lead to paying out more cash in dividends, buying back stock, or reinvesting in their business—all of which tend to benefit shareholders over time. With the upside to tax reform, there are also two risks to keep on the radar screen. There has been concern over growing income inequality over the past few years, and if the gap were to widen, some think this may have a negative impact on economic growth. Potentially the biggest unknown is the impact tax reform will have on the budget deficit. Will the theoretical benefit to growth offset the loss in revenues from the tax cuts?

An increase in infrastructure spending could generate opportunities for industrial companies, depending, again, on the timing and the type of work required. Currently, one of the biggest questions regarding the potential positive impact of infrastructure spending is where the dollars will come from to pay for the projects. A second unknown is the timing of the projects.

Though not part of the “four factors,” one of our biggest concerns is the talk of trade policy changes. Bringing more jobs to the U.S., particularly in the manufacturing sector, sounds great in theory, but the renegotiation of free-trade agreements could lead to global supply constraints, inflation, and rising prices to consumers. In turn, this could have a negative effect on the global economy and even result in a global trade war.

The investment outlook sounds promising, but there are areas to watch closely. Each of these policies has tangential effects on other areas of government and the economy; it is crucial for the success of any new policy to minimize the disruption to outside affected areas which can negate potential benefits—or worse. We continue to be wary of the geopolitical environment and the potential surprise factor inherent in our world today. We also need to learn and understand what could happen to corporate earnings if some of the policy changes in Washington hinder global trade. While monitoring the current environment, we will continue to invest according to our long-standing investment philosophy of seeking leading companies with increasing economic margins, as identified through our internal fundamental research.