Following a tumultuous end to 2018, investors welcomed strong domestic equity market performance during the first quarter of 2019. U.S. equity markets have rebounded smartly in 2019, with a 18% gain in the S&P 500 Index through April 30. The first three months of 2019 provided the best quarterly return for the S&P 500 Index since September of 2009. This stands in sharp contrast to the index’s losses on a price basis in 2018: 6% for the year, a staggering 14% during the fourth quarter, and 9% during the month of December alone (the worst December on record since 1931). Towards the end of the year, nerves were on edge due to chatter about a trade war with China, increasing interest rates, and regulatory rhetoric. The ferocity of the market’s decline going into Christmas Eve was indicative of indiscriminate selling without regard to valuation. In our opinion, hunger to harvest tax losses after 10 years of a bull market severely exaggerated the sell-off.

The rally in stocks has coincided with a slide in bond yields. Entering the last quarter of 2018, the Federal Reserve was on a clear path to continue increasing interest rates, with the aim of returning to more historically normal levels. However, higher interest rates can be challenging for companies and consumers. As the Fed began increasing interest rates in 2018, companies faced a higher cost of funding. Consumers, were especially impacted, as higher mortgage and loan rates made the cost of purchasing homes and cars more expensive. A direct result of this was a severe dip in the U.S. housing market during the early summer of 2018.

After witnessing the economy uncomfortably digest higher rates, the Fed decided to reverse course early this year and stopped increasing rates. Increases are not expected for the rest of the year. This reversal likely contributed to equities’ tremendous rally. As bond yields decline, many stocks and their associated dividend income become more attractive to investors. The sensitivity of the market to the Fed’s modest increases in interest rates is indicative that we, as a society, have become accustomed to low interest rates. Going forward, the Fed will likely be very careful in their efforts to normalize rates.

While we believe the sell-off at the end of 2018 was overblown, the sharp snapback in the market gives us reason to pause. Consider how extraordinarily strong the market’s recovery has been. Annualizing the 13% return in the first quarter would equate to a 52% return for the year. That is simply unsustainable. In only a few months, investors have gone from despondency to exuberance. At Clifford Swan, a few factors in particular are giving us reason to proceed with some caution.

One component of the market that is especially showing exuberance is the technology sector. We have seen the S&P 500 Information Technology Sector Index eclipse its former highs reached on October 3, 2018. Many of the same fears that caused it to sell off are still present: regulations, slowing revenue growth, and increasing competition. The sector’s 37% gain from Christmas Eve through April 30, 2019 is staggering and, again, seems unsustainable.

A high number of Initial Public Offerings (IPOs) are being brought to the marketplace. In IPOs, companies that have been in the hands of private investors “go public,” meaning that shares in the company are made available to the investing public for purchase. There are key differences between being a private and public company. When a company goes public, reporting moves from private boardrooms to public filings with the Securities and Exchange Commission—the details of which are reported in the Wall Street Journal. A company’s valuation is decided on stock exchanges rather than on internal spreadsheets. Keeping focused on long-term growth can be challenging after going public, as a company’s management team grapples with addressing investors’ often shorter-term focus. 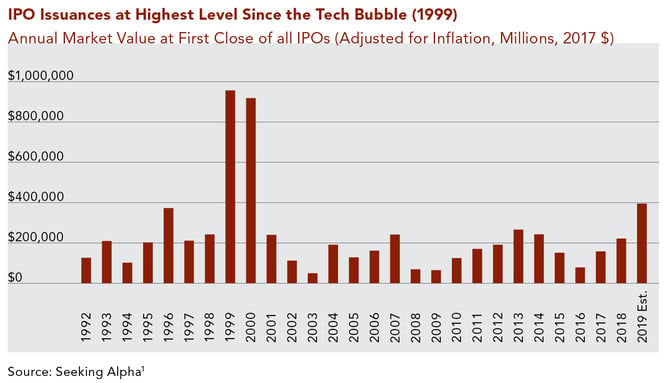 Why are private companies rushing to go public? After all, doesn’t it seem better to remain private and not subject a company to scrutiny by analysts and investors? Why have outside investors decide your company’s valuation?

The main reasons companies decide to go public are to raise money, create liquidity (which provides founders and initial investors with the ability to sell shares), and, potentially, to take advantage of frothy (overpriced) equity markets and correspondingly high valuations. The last time the market experienced a rush by technology companies to go public was in the 1999/2000 era. A very challenging period for equities followed that surge in IPOs, with the tech-heavy NASDAQ composite declining over 80% peak-to-trough from March 2000 through October 2002. When valuations become overextended, entrepreneurs see a chance to become ultra-wealthy, and look to take advantage of favorable conditions. Inherently, more IPOs usually indicate more appetite for risk. During the mega-IPO downturn at the turn of the century, even stellar survivors such as Amazon were down 93%. It is highly doubtful that many investors in Amazon at that time survived such a loss of capital. Instead, many likely sold their shares before the subsequent rebound.

What makes today’s crop of IPOs alarming is that they involve bigger companies, with the potential to fall further. Many of the firms currently coming to market are household names, such as Uber, Lyft, Pinterest, and Airbnb. Like in 1999, they are still mostly profitless (almost 80% of 2019 IPOs are expected to have negative earnings). At Clifford Swan, one component of our research discipline is to evaluate at least three years’ worth of operating history as a public company when considering an investment, meaning we don’t participate in IPOs. Our investment philosophy values companies that have proven themselves. IPOs can be unnecessarily risky investments, and even more so when they come public in a frothy market.

In a highly valued market environment that is attractive to IPOs, like we are currently experiencing, we can help insulate our clients’ portfolios by keeping equity allocations in line with our clients’ long-term goals. This means trimming exposure to equities as stocks continue to rise and equity allocations naturally increase.

Another item that gives us caution is the abundance of lower-quality corporate bonds in the marketplace. Invariably, most economic downturns coincide with a general decline in creditworthiness. Rating agencies, such as Moody’s, Standard & Poor’s, and Fitch, assign credit ratings to bonds. At Clifford Swan, we mostly invest in those bonds that are considered investment grade or higher. These carry ratings of BBB or better (BBB is the lowest “investment grade” rung). Currently, BBB bonds have dominated the investment grade market. The share of the investment grade market with a BBB rating is currently 52% versus 25% in the early 1990s. Importantly, given the increasing share of the investment grade market comprised of BBB bonds, we rely on our own credit analysis of companies rather than credit agencies to evaluate potential investments. We examine a company’s balance sheets and other financial reports to assess whether a company can cover their debt obligations.

The risk of downgrade is high for the pool of loans, as BBB companies have little room for error. If we start to see poor execution by some firms, subsequent bond downgrades might occur. This could lead to a sell-off in the bond market and make the interest rate demanded by investors for the credit of these companies higher. In turn, this could potentially destabilize bond markets, making it difficult to raise money.

In addition to a hot IPO market and corporate credit looking extended, high corporate profit margins are another point of concern. After the Great Recession of 2009, wage and expense growth (inflation) has been minimal, contributing to profit margins for U.S. corporations reaching all-time highs (see the chart below). Over the last couple of years, we have seen increased wages across many sectors and sub-industries. This will put pressure on companies, and corporate profit margins will likely contract. To protect clients’ portfolios, we will focus (like always) on investing in companies that are less sensitive to wage pressures and can maintain pricing power. 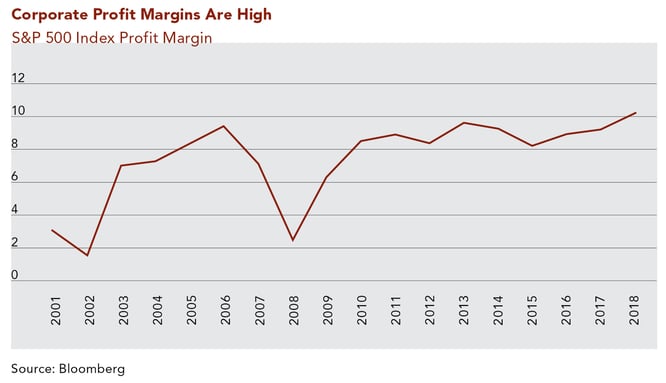 Remember, ups and downs are the normal course of business for the market. Given the factors described above, we believe there is reason to proceed with caution during this swift upswing and will look to a potential sell-off to take advantage of buying opportunities for our clients.