The price of oil continued to fall in January with subdued demand growth and persistently healthy supply. This resulted in oil recently trading below $50/barrel for the first time since the credit crisis recession in 2008. While the “normal” price level for a barrel of oil in the twenty years prior to 2005 ranged from $11 to $52 per barrel, the price has been above $50/barrel since 2005, except for a temporary dip during the recession. A question currently on everyone’s minds is, “What happens from here?” Predicting the price of oil is a difficult, if not impossible, exercise and not something we at Clifford Swan seek to do. However, evaluating the dynamics of oil—including the impact of price fluctuations on the investor/consumer, the mechanics of its production, and the economics of oil—affords a deeper understanding of a commodity which has a significant impact on the global economy.

The best place to witness the current “oil shock” is at the pump; the average price for a gallon of regular-grade gasoline was recently down to $2.44 in California. According to the American Fuel & Petrochemical Manufacturers, the cost breakdown for a gallon of gasoline is 65% for the oil, 13% for refining, 10% for distribution and marketing, and 12% for taxes. There are regional differences as well. Compared to California, the average price in Utah and Idaho was $1.84, while Hawaii was $3.11 as of this writing. It is understandable that Hawaii has the highest price because their delivery costs are higher—most of the gas used in Hawaii arrives from Asia via ship. The key reason prices in Utah and Idaho are approximately 25% lower than in California is the proximity of those states to oil sources in the U.S. (e.g. North Dakota). In contrast, California’s higher prices reflect the state’s need to obtain some of its oil supply from more expensive foreign imports, in addition to a state tax rate on gasoline that is $0.25-0.30 more than in Utah and Idaho.

According to the U.S. Energy Information Administration (EIA), a barrel of oil (42 U.S. gallons) generates roughly 19 gallons of gasoline, 11 gallons of heating oil and distillates, 4 gallons of jet fuel, and 10 gallons of other products. Crude oil prices are set globally by a confluence of factors which include the supply/ demand balance for the product and the interaction of buyers and sellers in both the spot (physical) and futures markets. Geopolitical risks, weather, the Organization of the Petroleum Exporting Countries (OPEC), currency exchange rates (both current and futures), inventories, non-OPEC countries, and other influences also contribute to the price of oil.

A common buzzword linked with the oil supply is “fracking.” Hydraulic fracturing (i.e. fracking) has actually been around for decades; first as an experiment in 1947 and then developed in the 1950’s. The process of fracking involves drilling down into the ground 4,000-6,000 feet to the rock and shale areas that have trapped gas and oil (versus drilling to an oil reservoir, the traditional source of oil). A fracturing fluid of water, sand, and chemicals is pumped into the rock, allowing the oil to flow and be extracted. Technological methods that started in the early 2000’s have made extraction methods more profitable, most notably the ability to drill horizontally.

The total worldwide production of oil is approximately 92.2 million barrels per day, of which OPEC contributes 39% and non-OPEC countries supply 61%. The U.S. is the leading non-OPEC supplier of oil, largely attributable to the increased production made possible by fracking. Looking at the chart below, we can see that both worldwide oil production and consumption have increased at a decent clip over the last five years. Production (gray line) has recently surpassed consumption (red line) and created a supply/demand imbalance which has caused the drop in oil prices. 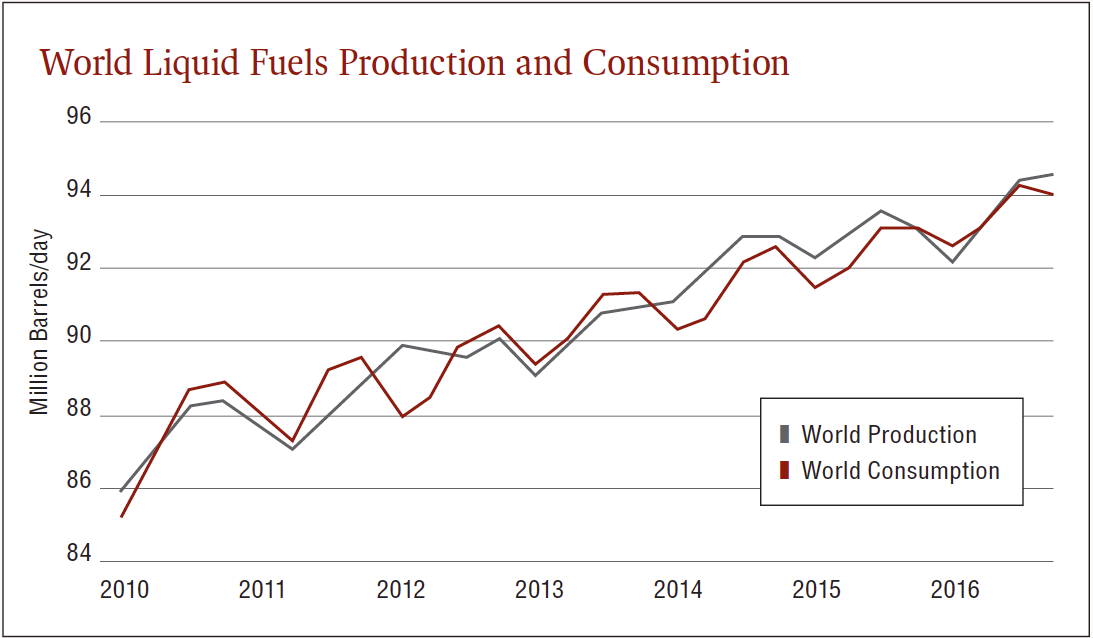 The increased supply from the U.S. is primarily responsible for production surpassing demand. One of the idiosyncrasies of the current situation is that, in past oil market moves, OPEC used its power to reduce production to steady oil prices. Recently, it did not take this anticipated action, contributing to the rapid descent in falling prices.

The fairly steady growth of supply and demand over the last five years was mostly driven by emerging market economic growth and newer sources  of oil. We anticipate that both demand and supply will continue to increase for the foreseeable future. With slow steady growth in developed markets and emerging economies continuing to develop, it makes sense that demand will continue its upward trend. Similarly, with new technologies, the production of oil supply will continue to rise. However, the supply of oil is not infinite, so at some point (20 years from now or 200?) the supply constraint will show itself.

“... in past oil market moves OPEC used its power to reduce production to steady oil prices.Recently, it did not take this anticipated action, contributing to the rapid descent in falling prices.”

As supply has caught up with and surpassed demand, we have seen a “correction” in crude oil prices which have fallen from $105/barrel in June to under $50/barrel in January 2015. Demand growth has slowed slightly with 2014 consumption increasing at a slower rate than from 2009-2013. The largest demand slowdown has been in China (though still rising, the consumption of oil is increasing at a slower rate). A very small contribution to the slowing demand may be attributable to increasing sales of hybrid and electric vehicles in the U.S. Hybrids have represented 2-3% of vehicles sold in the U.S. over the last eight years, helping to reduce our oil consumption by 1-2%, at most.

What will happen next? At $50/ barrel, there will be less incentive to extract more oil. Those technologies that cause the cost of producing a barrel of oil to be above $50-$75 will be utilized less, ultimately reducing supply. Anyone who tries to predict oil prices and timing will be undertaking a difficult task. A year ago, the experts at the EIA and companies like Chevron and Exxon were expecting and budgeting for a $90-110/barrel price; today, those prices (and plans) have been adjusted downward significantly.

As investors, we recognize there are many moving parts determining the price of oil and the impact that price has on other factors. With oil below $50/barrel, how do the economies of Russia (the third largest oil producer behind the U.S. and Saudi Arabia), Saudi Arabia, Iran, Kuwait, etc. react in the short-term and longer-term to the lower price? The EIA reports that petroleum/oil represents 36% of the energy sector and supplies 71% of transportation.

“As supply has caught up with and surpassed demand, we have seen a “correction” in crude oil prices which have fallen from $105/barrel in June to under $50/barrel in January 2015.”

With such a large percentage of transportation reliant on oil, how do airlines (for which fuel is a key cost) and the consumer benefit? What happens to demand for alternative energy with, effectively, a 50% discount on oil? Where the price will go over the next 12-24 months is unknown. While we expect demand to continue to rise worldwide, we know that supply has two factors: 1) it is limited, and 2) improving technology will allow better access.

Some immediate impacts of the low price may be that consumers who now have more discretionary spending money will use that money to pay down debt, eat out at another casual dining restaurant this month, grab a triple shot skinny macchiato instead of making a cup at home, take the family to a theme park, or upgrade their cell phone—all activities that benefit those companies involved. Lower prices may reduce the demand for hybrid and electric vehicles in the short-term, or reduce the demand for steel as new drilling efforts are stalled. With these few examples, we can see that lower oil prices can have a domino effect on other areas of the economy. We are not looking to play short-term fluctuations in the market based on oil prices, but to seek companies that many benefit over the next 3-5 years due to lower oil prices.